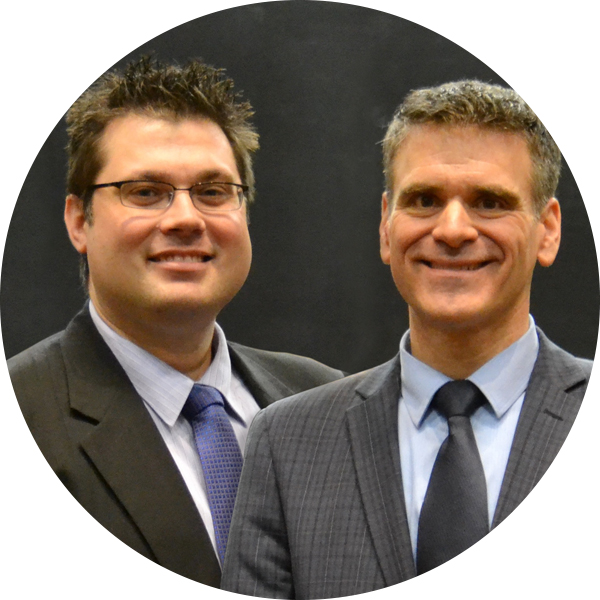 At the helm of the LCC Music Department are Scott Cheyne and Guy Cox, dedicated teachers and professional musicians, who have a great deal more in common than their love for music and teaching. They met while attending the same high school in Truro, Nova Scotia, and both played in the high school band. While Mr. Cox took up the trumpet, Mr. Cheyne favoured the tuba, for no other reason than it was the newest instrument that his school had purchased. Both received degrees in music performance from McGill University and both played in the Canadian Armed Forces’ Band of the Ceremonial Guard.

Though their paths diverged as Mr. Cheyne obtained a concours from the Conservatoire de musique de Montréal, as well as an education degree, and Mr. Cox went on to complete a Diploma in Education, it was perhaps serendipitous that the two would find themselves together again at LCC. “It is a unique teaching experience for Mr. Cheyne and me,” Mr. Cox says. “We really team-teach and have a compatible and similar philosophy towards our teaching.”

That philosophy, as Mr. Cheyne explains it, is to foster music-making as a form of expression and to help Middle and Senior School students develop discipline, learn how to be part of a team, listen to each other and play in time together. “There is a great deal of evidence,” Mr. Cheyne says, “that music has a large impact on children’s brain development and helps them grow as individuals.”

In keeping with this viewpoint, Mr. Cox stresses that it is the act of playing music that is important to who these students are. “The greatest benefit of any music education is to have kids play an instrument, read music, and to play with others and a conductor. “And,” he adds, “you don’t have to have a lot of natural talent to do it. Everyone can be taught.”

Both Mr. Cheyne and Mr. Cox recognize the uniqueness of the LCC experience, on many levels. “What I like most about being a part of LCC,” Mr. Cheyne says, “is that the students genuinely want to learn. They take being a student seriously, so it makes it enjoyable as a teacher.” Mr. Cheyne also appreciates the attention given to scheduling, where Monday afternoons are blocked off for Senior School band rehearsals. “Generally, no other activities are scheduled, which means that students don’t have to opt out of band if they want to do sports as well.”

This student engagement, along with a school that shows consistent support for the arts, are what Mr. Cox highlights. “The new Assaly Arts Centre is a testament to their commitment,” he says. “And our department is given the autonomy to teach music in a way that we believe is best for the students. I walk in here feeling that this is a place where things can happen.”

Travel to places such as Italy and Cuba, where students both attend and play concerts, has been one of the many highlights for this music duo. “The trip to Cuba brought the music program to a whole different level in terms of exposing the students to the arts and people in a different part of the world,” Mr. Cox says, who has been on 35 band trips in his career.

For Mr. Cheyne and Mr. Cox, the goals are not necessarily to produce musicians. Rather, both strive to make music a part of every student’s life and to help students understand that music is a way to express themselves without using language. “I want the students to have a love of music. If they walk away with one thing, I want them to walk away knowing the impact that they can have on other people through music,” Mr. Cox says.

Mr. Cheyne and Mr. Cox have achieved great success as professional musicians. Mr. Cheyne is part of the Orchestre symphonique de Longueuil and has also performed with the Montreal Symphony Orchestra under Kent Nagano, as well as the Orchestre métropolitain under Yannick Nézet-Séguin, among other renowned orchestras. When not teaching, Mr. Cox is always either playing or conducting. In particular, he plays for the 438 Squadron Band of the Canadian Armed Forces and is the music director and conductor of the Quebec Youth Wind Ensemble, a group that was formed to allow recent high school graduates to continue pursuing their musical interests.

Though music takes up much of their time, Mr. Cheyne and Mr. Cox still find time to have other adventures. By his own admission, Mr. Cheyne is a poor hockey player, having learned to play last June. “I am a student of something for which I have little talent, but I love it.” Mr. Cox spends his free time playing the mandolin, camping, kayaking and mountain biking, and experiencing life through the eyes of his young son.

Despite their successes, Mr. Cheyne and Mr. Cox acknowledge that making a living in music can be challenging. “But if a student comes to me telling me that he or she wants to go into music,” Mr. Cheyne says, “I will help that student prepare. And the advice that I will offer? Practice!”

“I will not make a judgment as to whether or not someone has the talent to make it as a musician,” Mr. Cox says. “If someone wants to study music, I might tell that person how difficult it can be, but I will still encourage him or her. Studying music as an undergrad can have significant positive effects.”

Mr. Cheyne and Mr. Cox both agree that it is always best to take a chance and that it is better to learn from the mistake while doing something than not doing it at all. And, perhaps most importantly, students should simply do their best and not compare themselves to the person standing next to them.