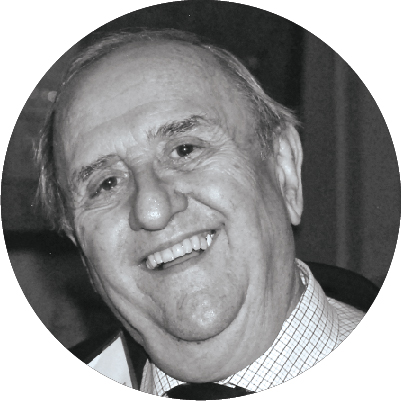 “Do it!” That is the credo of alumnus Robert de Fougerolles, words he has lived by all his life.

Mr. de Fougerolles graduated from Lower Canada College in 1957 and for almost 60 years has remained a loyal alumnus and a strong force in supporting the school. That force is evident in his determined spirit. When he had an idea he went after it. In his own words, “I start things.” His positive outlook has endured throughout an extraordinary life of experiences and successes, including climbing to 26,000 feet on the Tibetan face of Mt. Everest and qualifying as a paramedic. He admits the best decision of his life, however, was marrying his wife, Lida.

A successful business executive now retired in Canterbury, England, he has worked with many large multinational companies, most recently as a non-executive director of Olameter Inc. from 1998 to 2015. “I resolved that by the age of 35, I would not be employed by anyone, I would be the master of my destiny." To that end, he quit Cadbury/Schweppes on his 35th birthday. “If, after four years, you haven’t made your mark, you’re never going to make it, so find a suitable replacement.”

He says the best move in his business career was purchasing Perco Limited (Portable Equipment Rental Company). From 1976 to 1989, under his leadership as the president, CEO and owner, Perco became the largest equipment rental company in Canada and rose to be the 12th largest rental company in North America. He also applied his business savvy as a founding member of the faculty advisory board of what is now Concordia’s John Molson School of Business.

Mr. de Fougerolles describes how his parents, who worked in textiles, moved to Montreal from Joliette, QC, specifically so that he could have the finest education possible. That was found at LCC. He retains vivid memories of his time at the school, mentioning his love of math and sciences, involvement in gymnastics, and many of his teachers and fellow students. He remembers the rifle range (used by the Cadet Corps), as well as wearing short pants to school and an LCC cap. He also enjoyed the food created by long-time LCC chef Richard de Grandpré!

Mr. de Fougerolles was a talented gymnast. As there was no gymnastic team at LCC at the time, he performed individually for the school along with one other student, J. Alexander Fraser (Sandy) ’57. “I did about 30 hours a week and entered every competition.” Maj. Howard Gibb (Gibby), LCC’s physical education teacher, took him under his wing, prepping him for Collège National where Canadian gymnasts were trained. But his father “wasn’t having any of that,” remembers Mr. de Fougerolles. However, after finishing his engineering studies at Queen’s University, he found time to serve as a gymnastics judge at LCC.

He says that his education at LCC served him well. While English literature was not one of his preferred subjects, the spoken word was, and he valued a book received at LCC, Words are Important. “What marked LCC students, and still does, is their breadth of vocabulary.” During his first three years in chemical engineering at Queen’s, he explains that he didn’t have to study chemistry because his teacher at LCC had been light-years ahead in the subject. In his first year, he was already asking post-graduate questions of his professors!

Mr. de Fougerolles feels that his strong attachment to LCC is largely due to his having boarded at the school, allowing him to develop close ties. This loyalty and connectedness has facilitated his involvement in arranging school reunions over the years, where he and former classmates have enjoyed reuniting with highly-regarded former teachers. Among them was Miss Margaret MacFarlane, who had taught grade 3 at LCC in 1949 and met with former students at their 50th class reunion at LIONfest 2007.

Not one to fear the advances in technology, he acknowledges the Internet as being a strong component in his ability to find his old friends and bring them together to celebrate LCC and their time spent at the school. He has attended seven LCC class reunions, and looks forward to his upcoming 60th at LIONfest.

Mr. de Fougerolles’ advice to the next generation: “Don’t be afraid to try. If you see an opportunity, act on it. That’s business.”

NOTE: Mr. de Fougerolles passed away in April 2022 in England.